The Coalition’s first candidate briefing was held this week. Despite the nasty rain storm Monday morning, 15 candidates for the Pennsylvania General Assembly met with Coalition members, and we could not have been more pleased with the turnout. 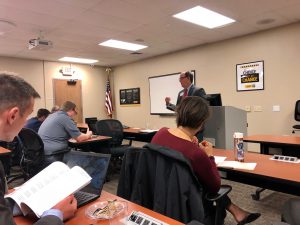 e meeting was hosted by Jay Cleveland at Cleveland Brothers’ office in Murrysville. We thank Jay for his hospitality.

The hour-long dialogue with candidates covered some of the mechanics, and the many regional benefits, of Act 89 in highway and transit improvements. Many thanks to Lucinda Beatty of the Pittsburgh Downtown Partnership for helping to get KTFC supporters and legislative candidates out to the meeting.

We have secured venues for four more meetings in October in State College, King of Prussia, Philadelphia Center City and Harrisburg, and we are working on a fifth in the Scranton/Wilkes-Barre area.